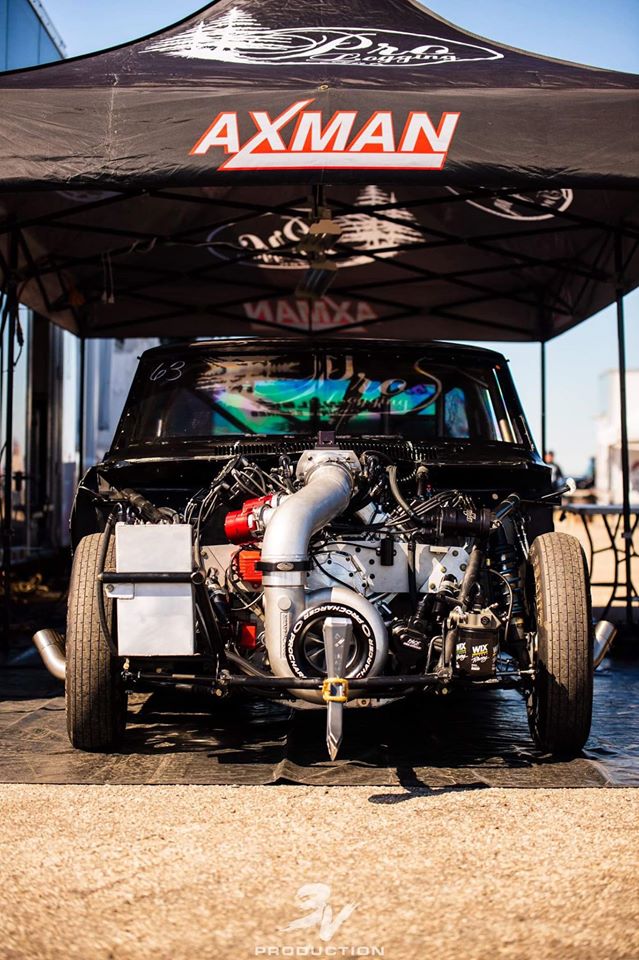 Larry “Axman” Roach has one of the most recognizable cars in no prep. Just look for the giant ax on the front of his 1963 Chevy II, and another on the rear deck lid. After running N/T radial N/T events for two years, Roach gave up the small tires for big ones, and has found a home in the no prep world. A regular on Discovery Channel’s Street Outlaws: No Prep Kings, Roach is having more fun than ever before. 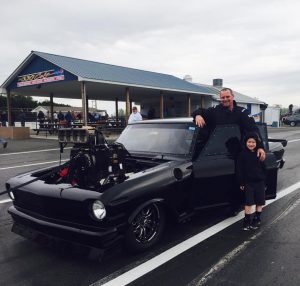 “Really, what got me to switch over was the radial tire racing was just unlimited money,” Roach says. “It was who was willing to blow their shit up and put another engine in right there on the spot was going to win. My last radial race, we had a few issues. It just stressed me out. I was done, was actually gonna sell the car. I came back home, and I told my wife, ‘I quit.’ Then we went to a No Prep Kings race at Galot [Motorsports Park], and we had so much fun. We lost…I think we lost first round. We didn’t do that well our first race, but we enjoyed it. We couldn’t believe how much we enjoyed it. And that’s what I told myself – from now on, that’s the way racing was going to be. I don’t want to hate going racing. I love it because it’s my hobby, and that’s what I wanna keep it at.”

That hobby began at an early age for Roach, watching his cousins race when he was around 10 years old. As he grew older, he started working on cars, eventually building his own 1972 Nova. Around the same time, he met Brent Austin, driver of the Megalodon 1969 Camaro.

“I think I was running low 6’s spraying nitrous,” Roach remembers. “I watched Brent at New London Dragstrip. He did an eighth-mile burnout in the raggediest old Nova you ever seen in your life, and it had a blown big block in it. Listening to that blower, I couldn’t believe it. I bumped into Brent where he worked at, and just by talking to him, he asked who was building my engines. At the time, I was doing it myself. I didn’t know anything about a blower. So he took me under his wing, built my motor, basically a whole car and everything.”

Running his small block, small tire Nova at local tracks, Roach experienced all the unpredictability of “no prep” long before it ever became an actual type of racing. With no rubber on the surface and no traction compound being sprayed, it was like racing on a regular street.

“No prep now is not like no prep when I started,” laughs Roach. “I remember going through the grass several times, knocking over 60 ft. cones, hitting the guardrail. That’s how bad the tracks were, we were all over the place. So when no prep came about, I knew I was at home.”

Roach, known at the track as “Axman” because he owns a logging company in Virginia, admittedly didn’t have the year he was looking for in season 3 of No Prep Kings. The chassis on his car didn’t like the extra weight he had to add for the twin turbo Hemi combination, and the ensuing broken parts made the beginning of the year a struggle. 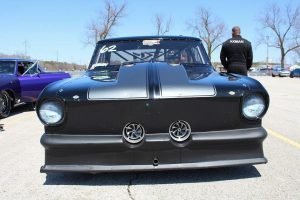 “I’ve never liked heavy cars in any racing I’ve ever done,” says Roach. “I kept having issues. Broken rear ends, twisted the housing, transmission issues. I actually broke the frame on the car twice. The car was built to be 2500-2550 lbs. A lightweight car, you can’t go and stack 300-400 lbs. on it and expect the chassis to work right. That’s one reason the first part of the season started out so bad. Just little things, just normal drag racing things, but I learned a lot too.”

After a mid-season switch to the F-3X 140 ProCharger – which can be run at a lower weight – the performance and results began trending upward, including a final round appearance in Chicago. While still not meeting his high demands – Roach admits he expects to win every race he goes to – his improvement later in the season was especially impressive considering he never got to test the new combo. 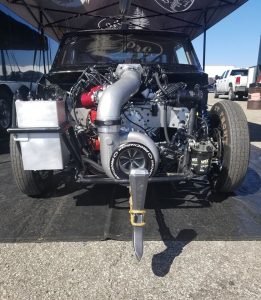 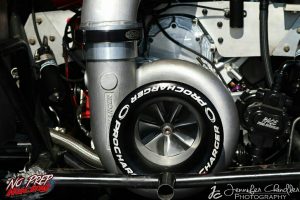 “I work all the time, so I don’t have the time to go test a lot,” Roach says. “We were just showing up to races and testing during live filming, basically. We had a few little glitches, we were figuring how much the car would take. After converting over, I probably won’t ever switch. Honestly, as soon as I started it up and cracked the throttle with the ProCharger, I was at home again. I ran blowers my whole life, I felt like I could be my old self.” 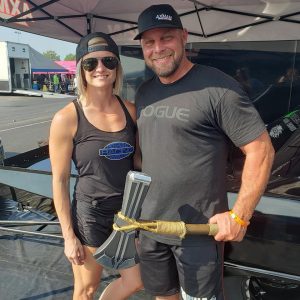 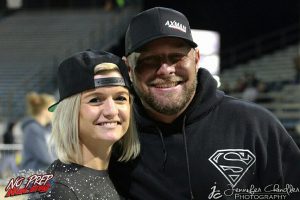 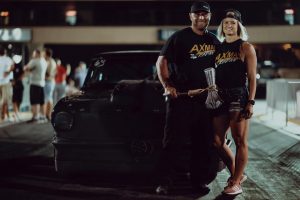 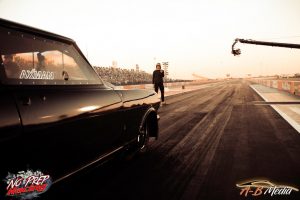 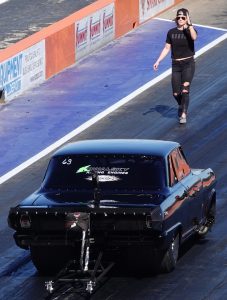 Equally impressive is that Roach does it all with basically a two-person crew. His wife, Sarah, can be seen lining him up at every race. But there’s a lot more to it than that. Roach says that while he gets some help from the Bruder Bros. and Team Vixen, his wife is the glue that keeps his racing program together.

“That’s probably the best part of it,” Roach says. “Because really, that’s the part that people don’t see, is how much she does. She holds it all together, all the way down to loading the car, strapping the car, packing up. Honestly, half the time I’m on the phone trying to keep my business running or dealing with work. She’s packing the luggage, food, making sure I’m on time, everything. And then it’s usually just me and her at the track. I probably couldn’t do it without Sarah. She does a lot more than people see, a lot more.”

Axman did become part of a bigger team to an extent in season 3, however. With racers from OKC, Texas, and New Orleans forming alliances, drivers from other locations scrambled to keep up, creating Team Outcast – an experiment that Roach says didn’t really pan out.

“Everybody wants to go in a different direction, everybody has their own idea,” says Roach. “And really, Outcast was put together in like five minutes. Reaper just said, ‘Hey, ya’ll wanna join a team?’ We didn’t know nothing about teams. Texas and Oklahoma knew they were gonna have a team this year. We didn’t have a clue. So it all got put together in five minutes, and eight grown men don’t need to be put on a team in a five-minute decision. You need to figure out if you want to be on somebody’s team or not, slowly build a team, that way everyone works together.”

While he has no intention of joining any such teams for season 4, Axman does plan to run the entire NPK series in 2020 with a brand new ride. He’ll be debuting a 1967 Nova built by Reese Brothers Racecars, complete with a Kowalsky Racing Engines Hemi and F-3X 140 ProCharger. Nick Bruder will be doing the tuning. 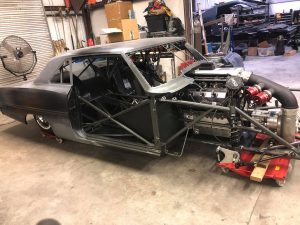 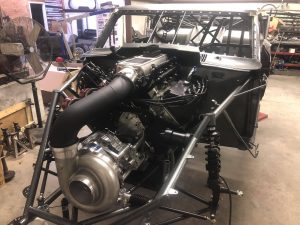 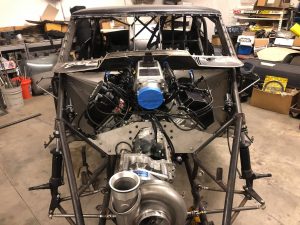 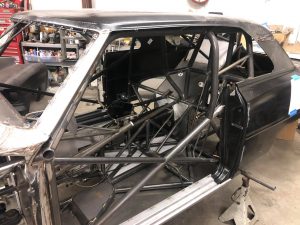 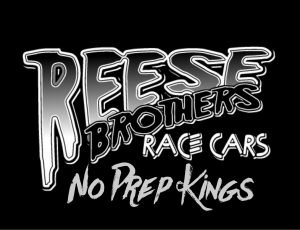 “The new car is going to be identical to the other one, it’s just going to be a ’67 body style,” says Roach. “Every piece on one will fit on the other car. If I break something, I can just pull it off the other car, put it on this car and keep racing. The chassis will be built for what I’m doing. It’s custom-built for no prep. If it’s faster than the old car, you’ll see it. If it’s not, you won’t see it. I don’t plan on racing no slow car. Hopefully it works great, and I can be a frontrunner. That’s my goal. I don’t wanna be chasing people, I want people to be trying to chase me.” 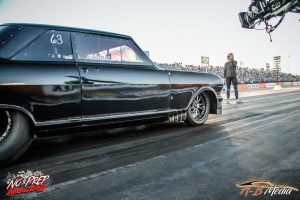 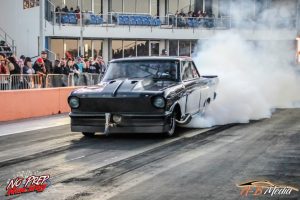 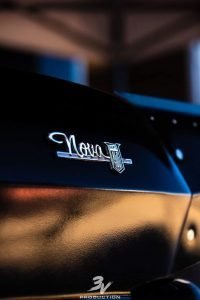 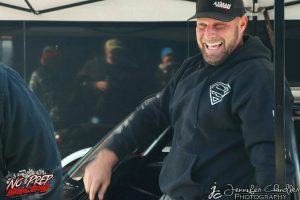 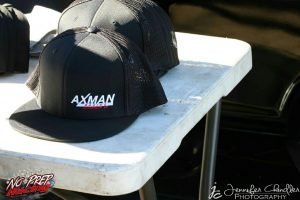 No Prep Racing: Up Close And Personal With The Birdman