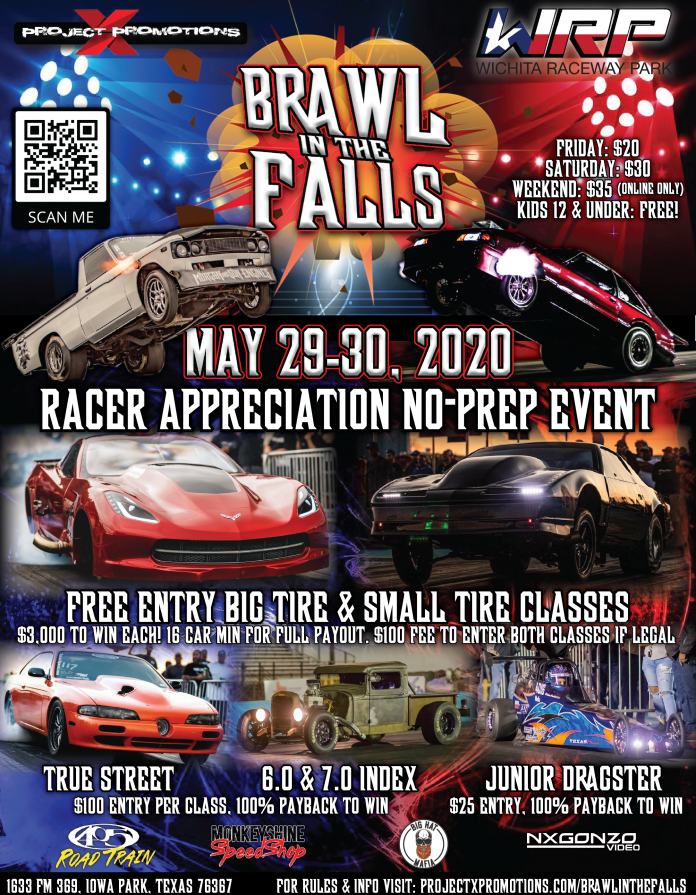 As the United States slowly begins to re-open from the coronavirus pandemic, no prep drivers and fans alike are itching to get back to the track. Thankfully, that will be sooner rather than later. The unofficial kickoff to the no prep season will be at Brawl in the Falls, taking place May 29-30 at Wichita Raceway Park in Wichita Falls, Texas.

The Project X Promotions race, led by Matt Plotkin and Jason Flores, is being deemed a “Racer Appreciation Event,” and will feature free entry for both the Big Tire and Small Tire classes. True Street, 6.0 and 7.0 Index, and Junior Dragsters will also be featured.

“For the past two years, me and Jason have been wanting to do something smaller scale,” Plotkin says. “Not a huge, blown-out-of-proportion event, but something for the racers. It’s free money. They don’t have to do anything besides buy a normal spectator ticket to come through the gate. We appreciate the fact that everyone supports us for as long as they have, and that the sport is as healthy as it is. Even given the current world situation, there’s this many people chomping at the bit to go race and come watch racing.”

While many tracks across the country are still closed, Texas has already allowed racing to resume, as long as certain criteria are met. But Plotkin says that as of right now, there will be no restrictions whatsoever by the time Brawl in the Falls takes place.

“The local officials told us that after the 20th, there was going to be no more social distancing guidelines mandated. So they haven’t even told us that we need to do anything different. That could change between now and the event, obviously, because nobody knows what direction it’s going.”

The new venue is a change of scenery for Project X Promotions, best known for their Bounty Hunters and Winter Meltdown events in San Antonio. The team is excited to be joining forces with Wichita Raceway Park, which has undergone a series of upgrades throughout the facility. The track purchased nearly all the equipment from the now closed Northstar Dragway, including a scraper, tractor, scrubber, grandstands, and concrete barriers. Seating capacity has risen from 1,500 to 4,000, and the bathroom sizes have doubled. The concrete barriers replace the guardrails that were previously in the shutdown area, ensuring driver safety.

“Chris Raska [WRP owner] got in touch with us and said, ‘Hey look, we’re making all these improvements to the track, we have a pretty much open calendar, let’s try to do something,’” Plotkin recalls. “I saw that as an opportunity to go to a place that’s trying to do good things for the fans and the racers, and put our program in place.”

Payouts for Big Tire and Small Tire are both currently $3,000 to win, although the team at Project X is working diligently to secure sponsors to increase the purse. The remaining classes will pay back 100% of the entry fees, and Tha Track Hustlers have even thrown an extra $500 in the pot for the Junior Dragster class, guaranteeing kids a chance to race for a good payday.

“We’ve got a couple more hooks in the water,” Plotkin says. “It’s tough trying to find people to sponsor races right now. People that we’ve had sponsor us for four or five years, it’s not that they don’t want to, but they can’t afford to. So it’s harder for people like me to get really good payouts like we’re known for having. Fortunately, we do have people that are in good financial situations that want to see us have this race, that are contributing.”

!!!! AND DID WE MENTION THE MAN THAT NEEDS NO INTRODUCTION…. MR BIG HAT MAFIA HIMSELF BARRETT GREEN WILL BE ANNOUNCING….!!!

BRAWL IN THE FALLS

Throwback video produced many years ago ...

TRACK HUSTLERS | THE GAMBLERS BALL NO PREP FULL COVERAGE BY...